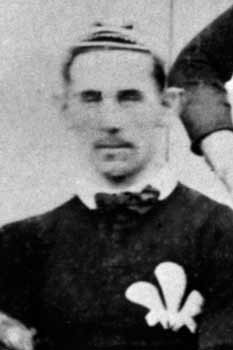 Fred Andrews
Position: forward
Clubs: Cheltenham College, Swansea, South Wales, Glamorganshire County.
Caps: Wales 2 1884.
F. G. (Frederick Graham) Andrews was born on 15th September 1864, one of four sons to Thornton Andrews, a Civil Engineer of Cefn Eithin, Uplands, Swansea. Fred Andrews was educated at Cheltenham College, enrolling with his brother George in September 1875. He was a natural athlete for a tall young man and played for the college football fifteen in 1881 and 1882, captaining them in the latter year. He also played in the cricket eleven in 1882.
The Cheltenham connection saw him come to Swansea Football Club in 1883. Swansea captains Charlie Chambers and Arthur Richardson had both been at Cheltenham along with several other Swansea footballers, and would have been aware of the rangy youngster's sporting prowess. Now eighteen, Andrews participated in the Swansea Cricket Club's Annual Athletics at St Helen's in May 1883, winning both the 200 yards hurdles and the pole vault competitions.
That autumn he joined the Swansea Football Club, going straight into the first fifteen. He played in the opening match of the season away to Gloucester F. C. at The Spa ground. It was the first time Swansea had gained a fixture with an English club and the powerful Gloucester side won comfortably by three goals to nil.
While at St Helen's Andrews also played in the Welsh Football Union's representative side of 'South Wales' away against Oxford University in a game where the new Oxford passing game was too much for the Welsh side, the great English half-back Alan Rotherham very effective in orchestrating the swift passing moves that would soon be taken up in Welsh sides. Fred Andrews also turned out for the Glamorganshire County side in a win over Carmarthenshire at Stradey Park. He played for Swansea Cricket Club in the summer, renewing the cricket activities that had seen him turn out for the invitational side of South Wales Wanderers in 1881 under the guidence of C. P. Lewis, the great all round rugby player and cricketer.
Andrews played as a forward in six games for Swansea that season, his last appearance coming at home against Newport in a drawn match. But he did not turn out for the South Wales Challenge Cup game the following week where Swansea were knocked out by eventual winners Llanelli. This concluded Swansea's season, the third under their captain George Morris.
This one season at Swansea Football Club saw Fred Andrews selected for the Welsh National side against England at Leeds on 5th January 1884. England won by a goal and two tries to a goal, Wales scoring their first try against the English. Andrews kept his place in the forwards for the encounter with Scotland at Rodney Parade, Newport on 12th January 1884. The Scots won by a drop goal and try to nil in a match where Swansea's Bill Gwynn dropped the ball when over the tryline, while he looked for support. Andrews was not reselected for Wales.
Fred did not move to another club at the end of the 1883-84 season, but left for New Zealand in 1884 along with his brother Gordon (b: 1867). They started a sheep walk and cattle ranch there together in the Wellington district. Fred Andrews was elected for the vacancy on the Whirokino Riding of the Horowhenua County Council (maj of 90 votes) in 1888. He was also appointed a member of the Whirokino County Roads Board. Fred and his brother returned to Wales in 1893, where he worked as an Civil Engineer, living in Uplands, Swansea. During the 1890s Andrews renewed his connections at St Helen's and joined the affiliated Swansea Hockey Club, captaining them in 1899.
Fred Andrews was also well known in boating circles and was a member of the prestigious Bristol Channel Yacht Club. Ronald Austin (Acting Honorary Archivist , at the BCYC) informs , that Fred Andrews was for many years Secretary of the B.C.Y.C. and was once referred to , by Thomas Lipton , as the best secretary of any yacht club in the world. At a dinner following the opening of the new B.C.Y.C. Clubhouse, at Mumbles in 1904, Fred Andrews was presented with a gold cigarette case, in recognition of his services to the club. He was succeeded as Secretary, in 1905, by Isaac Glasbrook of Norton House . Prominent at local regattas held in Swansea Bay Fred Andrews was Honorary Secretary of the Swansea Bay and Bristol Channel Yacht Club regattas, when the large yachts sailed in Swansea Bay in 1909, 1910,1913 and 1926. Himself a sailor, after winning the Dunraven Cup race, in 1899 , Fred Andrews was presented with an inscribed silver cigarette case in recognition of the achievement. The following year he became a member of the B.C.Y.C. Sailing Committee. In 1919 F. G. Andrews " signed into the Visitors Book" the Emir Feisal and his party , when they visited the B.C.Y.C. on 8rh November. A photograph, that included FGA , was taken on the steps of the BCYC.
Andrews worked for the Swansea Gaslight company at this time becoming its Secretary and possibly later on, its Manager, following in the footsteps of his father. He was involved in an embarrassing and very public divorce case in 1907, which was well publicised in the newspapers with letters and conversations printed. As a co-respondent, Andrews did not contest the case of adultery, which had involved a married member of the influential Bath family. This did not seem to affect his standing in sailing circles as he continued to be a prominent local figure almost up to the time of his death.
Frederick Andrews died in the Gower on 2nd June 1929 aged 64 years.
Many thanks to Mr Ronald Austin Hon. Archivist at the Bristol Channel Yacht Club for his content and advice in compiling this player profile.