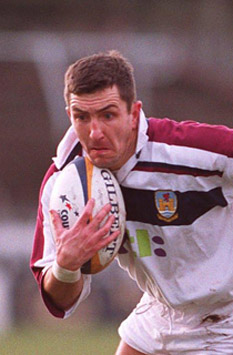 Robert Jones was a world class scrum-half in a period when Welsh packs were predominantly on the back foot. He was widely acclaimed for his inventive play with his crisp passing considered unsurpassed in his time. His box kick from scrum and lineout was very accurate and he possessed, like his illustrious forebear Dicky Owen (qv). a bullet like reverse pass. He won his first Welsh cap in 1986 v England aged 20 after a string of impressive performances for Swansea. The following year he played in the first World Cup, helping Wales to achieve third place. Forming a lethal and inventive partnership with Jonathan Davies, Jones tasted further success with Wales in the 1988 Triple Crown side and the 1989 side that beat England at Twickenham. He shone at his best in the successfull 1989 Lions tour to Australia where he had a running battle with the Wallablies' Nick Far-Jones throughout. In 1992 he was instrumental in Swansea's defeat of reigning World Champions Australia at St Helens and toured again with the Lions in 1993 to New Zealand. His last Welsh cap was in the 1995 World Cup v Ireland and having captained Wales (5 times). Robert Jones also played for Swansea against all the southern hemisphere 'Big three' tourists. As well as the historic win over Australia in 1992, he played for Swansea against New Zealand in 1998 when the All Blacks were outscored in a thrilling second half, but went on to win. He also turned out against South Africa for Swansea in 1994 when the future World Champions gave a demonstration of the form that would lift them to rugby's summit the following year. Jones captained Swansea in1989-90 & 1990-91 and later skippered Bristol. He played for Western Province in the 1994 Currie Cup and briefly for Cardiff RFC. He also played 10 times for the Barbarians invitational side between 1985 and 1996, captaining the 'Babas' to victory over Argentina (1990) and South Africa (1994). He also captained them against East Midlands (1996). Robert Jones retired from rugby in 2001. He is currently a sought after rugby pundit on radio and television. Robert also played cricket for Glamorgan Colts and at 3 different age levels for Wales.