The home side signalled their intent in the opening exchanges when a clever chip through by centre Will Rees-Hole set up the first notable attack, but full back Josh Thomas cleared the danger, and was tackled high by Rees-Hole, giving Swansea a relieving penalty.

Winger Ben Cambriani then had his own chance to chip through inside the Cardiff twenty-two, but his attempt rolled over the touchline.

A storming run by hooker Dewi Lake created an attacking platform for the visitors, but fly half Steffen Williams’ grubber kick found touch a couple of metres short of the line.

Number eight Morgan Morris stole possession at the breakdown and charged up to the twenty-two. Lake and scrum half Tom Ham made good yards, but Cambriani was bundled into touch.

A long penalty touch finder by fly half Gareth Thompson earned the Blue and Blacks a lineout a few metres out. Hooker Joey Tomlinson’s throw was originally too high and the Swansea defence gathered possession, but a mistake gifted number eight Morgan Allen a simple try, which was confirmed by TV match official Tim Hayes. Thompson converted.

Ham caught opposite number Lewis Jones napping at a scrum and turned defence into attack, but although the backs got quick ball out wide, the final pass to Cambriani didn’t go to hand as the winger watched in despair as it sailed into touch.

The home side worked their way into the Swansea twenty-two, but came up against a resolute defence, which forced full back Dan Fish into a mistake.

The home side struck on the half hour mark with a superb try as Fish split the defence with his pace, finding centre Adam Jones in support, before taking a return pass to score under the posts. Thompson converted.

Cardiff strayed offside in midfield and Steffen Williams turned down a kickable penalty to chip to the corner. The Swansea pack mauled forward but were held up over the line.

From the resulting scrum five, the visitors were driven backwards at a rate of knots and were able to counterattack through Allen, and his chip through was fumbled into touch by winger Gareth Rees.

The visitors’ pack forced a penalty at a scrum and Steffen Williams kicked to the corner. The Whites’ pack mauled forward, but a strong Cardiff front eight secured a turnover.

Thompson kicked an early penalty goal after the interval when the Swansea defence were guilty of an offside offence.

Thomas ran back at the Cardiff defence when he fielded a high kick and earned a penalty when the Blue and Blacks failed to roll away in the tackle. Steffen Williams kicked to the corner, but lock Sam Pailor stole possession at the lineout.

Allen intercepted a pass on his own twenty-two and raced up to within a few metres of the try line, but he ran out of gas and lost possession as his side were too slow to reach him.

It mattered little though as the home side were soon back in possession and Lewis Jones dummied his way over for a try under the posts. Thompson converted.

Thomas found touch on the Cardiff twenty-two with a penalty, and from the lineout replacement hooker Paul John powered over for a try in the corner. Thomas missed the conversion.

The visitors were penalised for collapsing a scrum and Thompson opted to kick to the corner. Lewis Jones tried to power through on his own but became isolated and was promptly turned over.

Further Cardiff pressure almost resulted in try number four but winger Joe Gatt was unable to chase down Thompson’s kick to the corner.

But the home side were soon handed another chance to grab a bonus point with a late scrum five. However, the Whites turned over possession and almost scored themselves when Cambriani sprinted deep inside the Cardiff half, but he was tackled.

Thomas made a promising break, but the supporting replacement number eight Callum Bowden was brought down on the twenty-two. The move broke down though when the visitors were penalised for holding on after the tackle.

Next up for Cardiff is a trip to Ebbw Vale, while Swansea host Bedwas.

Man of the match:-   Morgan Allen 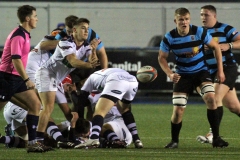 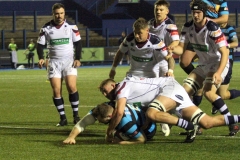 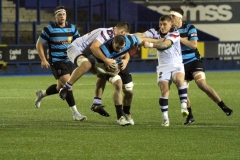 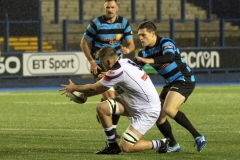 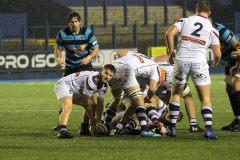 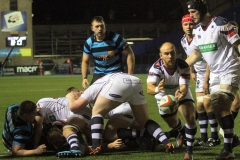 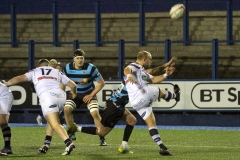 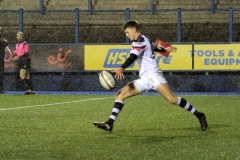 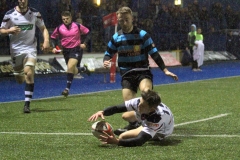 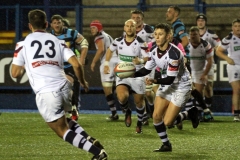 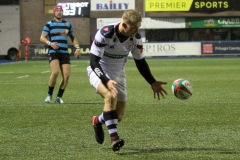