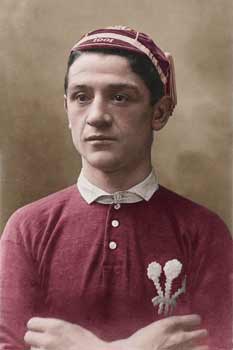 Owen’s abilities on the field of play were summed up by the Times rugby correspondent in his obituary:

“Owen had three qualities which entitled him to be remembered as one of the great players. Though a little fellow, he was granite in physique and spirit, a great tactician apart altogether from his box of tricks, and as near perfection as possible in the technique of passing the ball. The way he took his gruelling in the terrific struggle between Wales and New Zealand at Cardiff in 1905, and his cleverness in initiating the move that enabled [Teddy] Morgan to score the winning try, alone would have made his name. His grim little ghost of a smile and stoicism, indeed, earned for him more friends in the most unlikely quarters than his craft and skill.”
“As for his technique, it could be summed up in his own words – “I either run or pass.” He would amplify this by explaining that, if he intended to pass, he never wasted an inch or a fraction of a second in dispatching the ball. And the power behind his famous scoop away had to be felt to be believed. It was equally characteristic of the little fellow that if he elected to slip away on his own, he was not afraid to run right up to an opponent before giving his pass. Timing and courage, in fact, went hand in hand with him, as no doubt it always did and always will in rugby football.” (The Times Mon. 29th Feb. 1932 p5).