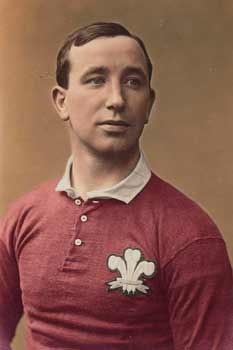 Dick Jones of Swansea was a very good outside half - probably a great one - but his individual reputation has always been overshadowed by the reputation he enjoyed in combination with Dicky Owen, his club and international scrum half partner.
Like Owen, Jones came into the Swansea side after the brilliant James brothers had given up the game just before the end of the nineteenth century. Almost at once the puny Owen and the handsome Jones struck up an almost telepathic understanding. Incredibly, the club champions lost two legendary half-backs only to see them replaced by an even greater pairing, and the title continued in Swansea's safe grip.
Jones was a brilliant runner who could dodge, jink and swerve very cleverly. His kicking also marked him out for he was one of the first halves to mix running with kicking in offence. But it was his judgement that made him stand out for he was a greater thinker than many players who had more ability than he had. Gradually, Owen and Jones were able to anticipate immediately and intuitively the others' forthcoming move. Both were always looking for new ways of doing things - so much so that opponents never knew what to expect of them. As a result, when sides tried to plan a defence, they were at a loss and so apprehensive that they often failed to organise anything. If the opposition did manage to play well enough to contain Jones and Owen, then this would just be another challenge for the pair to raise their game to an even higher plane.
Welsh selectors have always been in favour of playing club pairings at half-back and in 1901, after Newport's Phillips had broken down in the Scottish match, Jones and Owen were called up for their first caps against Ireland. It was the first of fifteen appearances together for Wales - a record not beaten until John and Edwards. Wales were fortunate to win and the Swansea pair hardly distinguished themselves. Jones and Owen played against England in 1902 but then Jones was dropped in favour of G. L. Lloyd (Newport) whose form was such that the advantage of club pairing was not enough.
Although Jones continued to play brilliantly for his club and Glamorgan he was not picked again for Wales until 1904, when he proved his class by some superb kicking to defeat Scotland and some magnificent running and support play against Ireland.
1904-05 was the year of the Swansea Invincibles and Jones, with Owen, was at the top of his form. His superb running carved out opening after opening against England, and Wales ran in seven glorious tries. But two weeks later at Newport, Jones broke his instep in a club game and he did not play rugby again until November 2nd 1907.
Jones returned against France in 1908 and then starred in the Triple Crown decider against Ireland by making the winning try. 1908-09 brought Wales five wins - Australia and the Grand Slam - and Jones and Owen masterminded some excellent play. It was a year in which the pack struggled for parity but superb back play ensured enough scores for victory. Dick Jones also featured in Swansea’s win over Australia on 26th December 1908. His superb interplay in this match with Dickie Owen baffled the tourists, one of the Aussie’s commenting afterwards how difficult it was to guess Jones’ movements: “When he runs not a muscle moves on his face.”
1910 brought a sad final game for Wales for, after taking France apart on New Year's Day, Wales headed for Twickenham. But England beat Wales for the first time in twelve years. Jones and Owen were dropped and while Owen returned in 1911, a serious accident ended Jones' career prematurely. Dick Jones was a stonemason by trade and later, a licensee. He died in Swansea on 24th November 1958.

A man of great modesty, Jones had high praise for his club and international half-back partner Owen saying: “He carried me into several [Welsh] teams.” If this was true it was because of Dick Jones’ ability to put the half-back pairing and tactical game before his own ego. On their day the pair were literally untouchable.
(main text from: "A Century Of Welsh Rugby Players" by Courtesy: Wayne Thomas.)