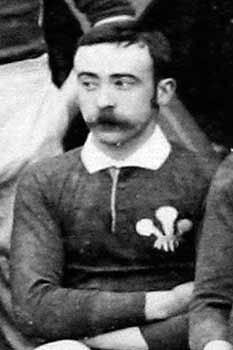 Profile
David (Dai) Gwynn played as a back on 6 occasions for Wales between 1882 and 1891. His first game for Wales was at his home ground of St Helens against England in 1882 which was the first Welsh international on Welsh soil. He did not play again for Wales till the 1887 championship. His brother Bill Gwynn played for Wales in this intervening period though they never played together at international level. Dai Gwynn's second cap was another loss, this time to Scotland. He was however, in the 1890 Welsh side that beat England for the very first time and played in the drawn game with Ireland that year. He played his last two Welsh internationals against Scotland and Ireland in 1891.

He made his debut for Swansea in February 1880 and continued playing for the club until 1890. Dai was part of the Swansea side that won the South Wales Challenge Cup in 1880 and again for the second time in 1887. He was also leading points scorer for Swansea in the 1879-80, 1885-86, 1886-87, 1887-88 and 1888-89 seasons. In April 1890 he went to play for Oldham and captained them in 1890/91. He also played centre for the Lancashire team that won the county championship in 1890/91.
Dai Gwynn was a talented footballer in both codes, having played for the Blue Star Association club of Swansea before his move to Swansea rugby Club. He had also turned out for the Cambria Swansea club in the rugby code. Equally comfortable kicking with either foot, he was well known for his drop goals and his tactical kicking. He settled easily into the new four three-quarter system that Swansea adopted around 1884 under captaincy of his brother Bill. Dai Gwynn usually played at wing three-quarter. During Swansea’s cup winning season of 1886-87 Dai Gwynn was vice-captain to Evan Richards and led the team on several occasions when Richards was injured. He scored what was then a club record of 17 points ( 1 try, 2 drop goals & 6 conversions) in a match against Neath on 29 January 1887 at St Helen’s. Gwynn played several games for the South Wales Football Club and was also a keen cricketer, playing for the Swansea and Glamorgan cricket clubs.
He made a very successful move to the Oldham club in 1890, representing the Lancashire County several times. In 1894 he played briefly for Exeter before his retirement.
Dai Gwynn eventually returned to Swansea after his playing days were over. He was later associated with Swansea cricket club for many years, particularly as club umpire. Sadly, he died in Swansea of consumption in the workhouse in 1910. He was the younger brother of WH Gwynn.