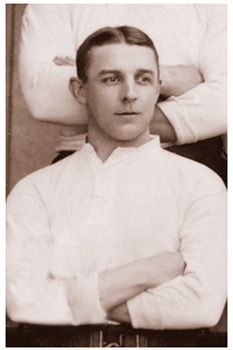 Profile
T. S. (Sid) Bevan was born Thomas Sidney Bevan in Morriston, Swansea on 2nd May 1877. Educated at Ardwyn Grammar School, he joined Swansea Rugby Football Club from Morriston RFC as a forward in 1897. He enjoyed a career at the club during its 'Golden Era' winning six Championships as a player from 1900-01 to the 'Invincible' season of 1904-05. Bevan won his one Welsh cap in the 14 - 12 win against Ireland at Balmoral Showgrounds, Belfast on 2nd March 1904, becoming Wales' 200th cap. At the end of the 1903-04 season he and Swansea wing, Fred Jowett were selected for the British Isles tour to Australia and New Zealand, thus becoming the Swansea club's first 'Lions'. Departing in May 1904, Bevan played 17 matches on the tour between June and August, scoring 3 tries (against NSW Waratahs, Metropolitan & Queensland Reds) and played in 4 of the Test matches (3 against Australia & 1 against New Zealand). Sid Bevan served in the Great War as a 2nd Lieutenant in the 6th Btn, of the Welch Regiment. He died on 17th October 1933 aged 56.