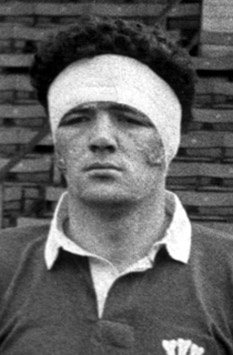 'Merve The Swerve' as he was universally known, played 38 times for Wales winning his first cap v Scotland in 1969 and was on the losing side only 9 times. Instantly recognisable with his trademark white head bandaging and moustache, Mervyn was an intelligent reader of the game with an uncanny sense of anticipation enabling him always to arrive first at the breakdown. An athletic jumper at the tail of the lineout, he was the controlling factor at the back of the scrum for Wales and the British & Irish Lions where his lanky figure belied great strength in the maul. He was a key figure in the successful Lions tour to New Zealand in 1971 while with London Welsh and South Africa in 1974 while playing for Swansea. He captained The Whites in 1975-76. It was when captaining Swansea v Pontypool in a 1976 cup game that he suffered a brain haemorrhage ending a career that would surely have seen him captain the 1977 Lions. With distributive skills second to none, he still stands for many as the finest No8 produced by Wales. He played his last game for Wales v France in 1976 and was inducted into the International Rugby Hall of Fame in 2001.