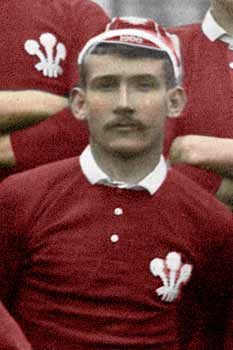 Born on Christmas day 1875, George Davies was a stonemason by trade. He came into the Swansea 1st XV in the 1895-96 season as a centre where he prospered as part of an established three-quarter line including Billy Trew and Frank Gordon until the retirement of Billy Bancroft (1903) meant his occasional duties as full back became a permanent position for him.
Davies' career had begun in his hometown of Llandeilo where he was something of a local hero. He captained Llandeilo RFC for two seasons, 1894-95 and 1895-96. This was a particularly successful period for the Carmarthenshire club who were unbeaten from 1895 to 1898. George Davies was the first Welsh cap to hail from the Llandeilo club, though his caps came as a Swansea player. Llandeilo lore has it that he was credited with inventing the "dummy" manoeuvre on the rugby pitch. This laurel has been paced on many Welsh players' heads including Pontardawe Jack Davies. However, George Davies seems to have been a very effective early exponent of the art at least. In December 1895 he is said to have first practiced the move as Llandeilo captain in an away game against Pembroke Champions Tenby United, in which match he scored six tries and three drop goals in a 50 point win (7 goals and 6 tries), acknowledged by the Tenby men who carried him on their shoulders from the field at the final whistle. Davies started playing for Swansea toward the end of 1895-96. By the end of the season he moved to the club, a move which was marked later with that club playing a match at Llandeilo with a full strength side bar Billy Bancroft, who refereed. A close game was won after Fred Scrine regained the lead for the Welsh Champions, which they then held to the end.
Ever a favourite with the Swansea crowd, Davies seemed to always have time to think as he played. This and his natural ability to wrong-foot opponents led to some wonderful moments on the St Helen’s ground. On 13th February 1897 the strong West Country team of Barnstaple were the opponents, on their Welsh tour. They had held Swansea to a nil all draw back in September at Barnstaple. But this day they met an ‘All Whites’ team at the top of their game and George Davies at his peak. His second-half try was the talk of St Helen’s for years afterwards. The South Wales Daily Post reported:
“Eventually there came a scoring incident, which will live long in the memories of those who witnessed it. George Davies receiving a long pass several yards on the Swansea side of the centre, made off in fine style. He was first of all confronted by a group of forwards, but got through them. Making off once more, he thrust aside one of the halves, and then wriggled through the three-quarters, and goodness knows who, and after being momentarily impeded by the full-back, travelled to the line and scored amid a scene of indescribable enthusiasm. The loud and prolonged cheering delayed the resumption of play, and it was maintained again and again. Old stagers could scarcely recall a try of such superb merit.”
A strong runner and tackler, though not a natural at full-back, he worked hard at his kicking game. His growing reputation meant he was hunted by the Northern English professional clubs and he went as far as travelling to Manchester to discuss terms with Oldham, along with his Swansea team mate Dan Rees. Happily for Swansea, neither of them was induced to participate in a trial match which would have branded them as professional players.
With his stock as a player rising at St Helens, he was selected to play against England in 1900 at centre aged 25 and he held the position for the remaining two internationals against Scotland and Ireland that year, scoring the try that won the match (the only points scored in the match) against Ireland at Balmoral, Belfast. Selected again at centre in 1901, he played in all three internationals. With the growing partnership of Cardiff's Gwyn Nicholls and Rhys Gabe, Davies found himself dropped as Bert Winfield took the full-back duties over from Bancroft. But he was reselected following solid performances for Swansea in their "Invincible" season of 1904-05 at full-back. It was in this position that he won his last three caps for Wales in the 1905 Triple Crown winning side. He kicked two conversions in the 25 - 0 thrashing of England at Cardiff, and another two in the Triple Crown match at his home ground of St Helens. For Swansea, he also played in the side that so nearly defeated the first All Blacks at St Helens in December 1905 before retiring at the end of 1905-06. He had played 276 matches for Swansea’s 1st XV and apart from injuries, was never dropped from the side during his career. He was an integral part of the Swansea teams that won 6 Welsh Championships in 7 seasons from 1898 to 1905. He scored 605 points for the club, comprising 120 tries, 88 conversions, 15 penalties, 19 drop goals and 2 goals from a mark. George Davies died in 1942. His gold medal from the Championship winning 1898-99 season is still on display at St Helen’s.
Davies was one of seven footballing brothers. He and his brothers were known to challenge any other seven brothers in Wales to a 7-a-side match. The Williams' of Pembroke took up the challenge in 1909 but were soundly beaten. Two of George Davies’ brothers; Jack and Llew also played for Swansea.