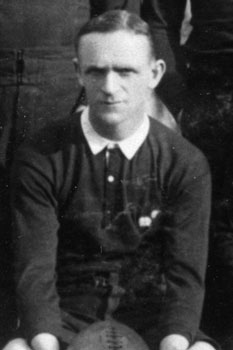 
Profile
Jack Bancroft has always remained in the shadow of his elder and more famous brother, Billy Bancroft. Billy was the player to the gallery, the supreme egotist on the field, while Jack was the steady, no-nonsense, straightforward traditional full-back. However, Jack scored more points (88) than Billy (60) did for Wales! Jack Bancroft made his debut for Swansea in 'the "Invincibles'"of 1904/5- there were about a dozen present and future internationals playing for the club during that season. In the following season Bancroft made more appearances but it was 1906/7 before Bancroft became Swansea's regular full-back and prime goal-kicker.
It was in 1908/9 that Bancroft received national recognition and, like his brother before him, made his debut because the chosen full-back was injured. Once in the side, Bancroft played admirably, but he did miss several internationals through injury. Bancroft was chosen to play against England at the Arms Park in 1909 to make seven Swansea players in the Welsh side. This selection was based on Swansea's brilliant 6-0 win over the Wallabies when Bancroft kicked a vital penalty. Bancroft converted one of the tries and then kicked the decisive conversion late on against Scotland to clinch victory 5- 3. However, he was nearly responsible though not knowing it for defeat at the end of the game because he was penalised for lying on the ball. The referee awarded a penalty to Scotland which was narrowly missed but Bancroft had been kicked unconscious while falling on the ball! Bancroft had a field day against the French in 1909, converting six tries, and he banged over another three in the Triple Crown decider against Ireland. It was a brilliant season for Bancroft with his 22 points for Wales, he kicked 104 for his club! On New Year's Day, 1910, at Swansea, Wales ran up her highest ever score in internationals, 49 against France. It was an embarrassing, one-sided affair, which the Welsh players took very half-heartedly in running in ten tries. But Bancroft took his opportunities very seriously and steadily kicked eight conversions and one penalty to set a Welsh record of 19 points in one match. However, the record slipped out of sight, even if it ever registered, until Keith Jarretts epic debut equalled it. Only hurried checking through old copies of the ''Western Mail'' on the Monday after the English match in 1967; rediscovered Bancroft's feat! Bancroft played his part in the 1911 Triple Crown triumph but broke his collar-bone against the Baa-Baas. He returned for most of 1912 and played his greatest defensive game in the defeat by England at Twickenham. He was captain against Ireland but injury cut short the season again. This time he was out of the game until the latter part of 1913, tragically missing the Welsh and Swansea matches against the Springboks. He might have drawn the former game! He kicked the winning points against Ireland in 1913 and played most of 1914 before injury and war came.
Bancroft was not unusually talented, but he laboured long and hard to improve his play. His kicking was accurate but not very long. His tackling and falling were solid but his judgement occasionally lapsed. He would sometimes let the ball bounce before catching it but his courage was never in doubt. His goal-kicking was sure and correct and his 88 points for Wales (47 against France) were a record until Barry John came along. His international record was a good one as the first Golden Era drifted away, although he was blamed by several colleagues for the defeat at Twickenham in 1914, which cost Wales the Triple Crown and Grand Slam. Apparently he failed to mark a ball for some ''unmentionable'' reason!
(Text from "A Century of Welsh Rugby Players" by courtesy: Wayne Thomas)